Freshness Note
This post is more than 2 years old. While many thoughts survive the test of time, specific technologies or approaches may not. Please enjoy with that in mind.

New Cloud IaaS providers are coming out of the woodwork these days. Here are ClearlyTech’s current picks for the top-tier solutions you should consider before you deploy to the Cloud.

Amazon AWS is the 400lb. gorilla in the space. Their pure-play IaaS product is their Elastic Compute Cloud (EC2). It’s the largest, oldest, and most feature-rich of its peers.

Amazon has had its issues over the years, sometimes bugs, sometimes bizarro pricing, and their share of highly publicized downtime. But they are a giant, and with all that experience comes a maturity that should count a lot when hunting for a reliable partner to run your high-traffic application. They are a tried-and-true solution at this point, warts and all.

Note that Amazon may not be (probably isn’t, in fact), the best technical solution. Other newer entrants to the game have had the opportunity to watch Amazon’s trials over the past 7 years, and improve in the few areas that Amazon has shown weakness.

Despite these minor issues, ClearlyTech favors Amazon AWS for large scale production needs. Gartner Group agrees so strongly that AWS lives in a quadrant all its own among cloud hosting providers in their 2013 report. 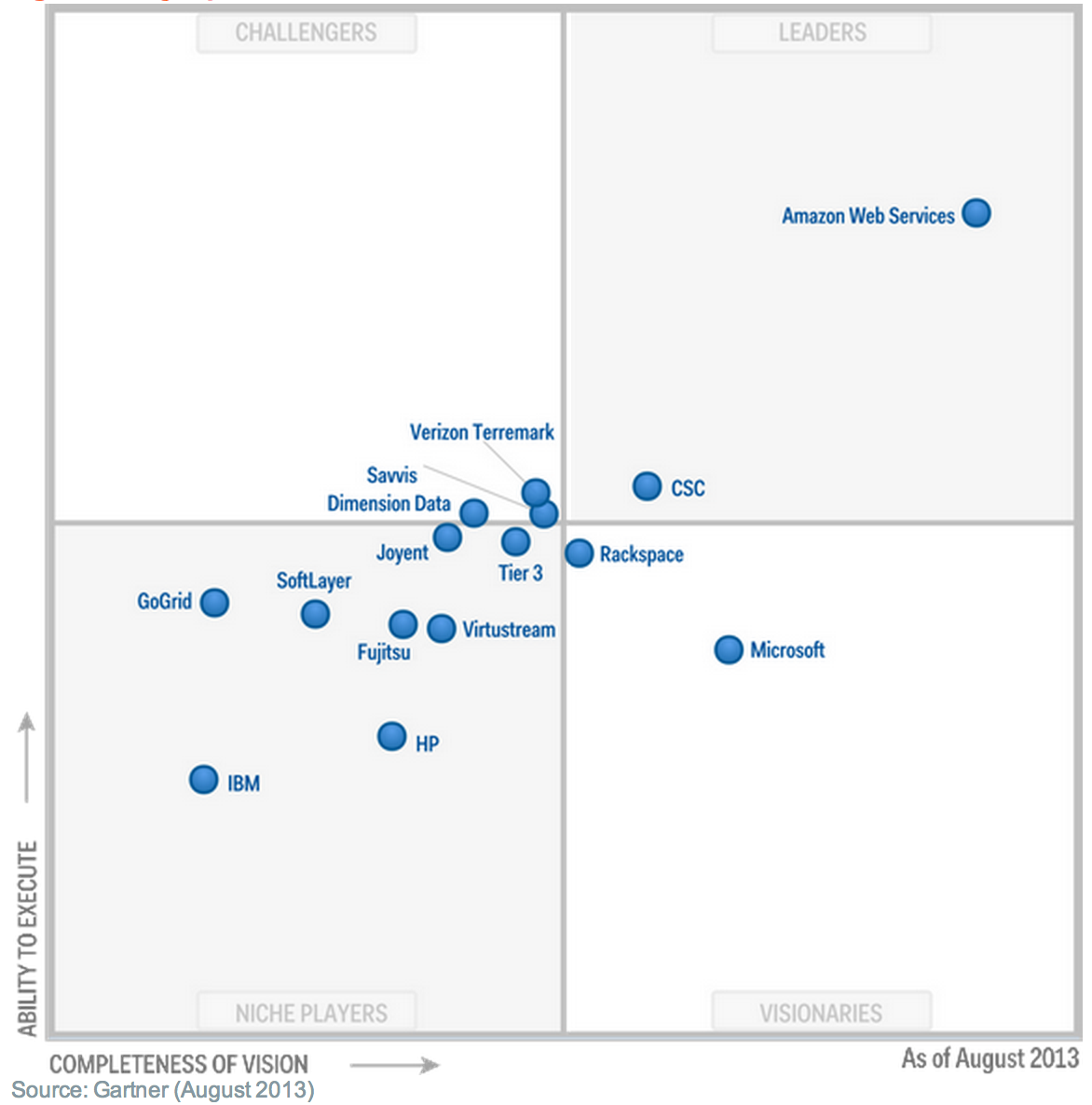 ClearlyTech recommends Rackspace as another long-standing player in the hosting business worth a look. Rackspace was a pioneer in the managed-hosting space (they run your traditional infrastructure), and has recently put a lot of attention into a Virtualized Cloud hosting model to compete with AWS.

If the lack of good customer support from Amazon is a deal-breaker for you, Rackspace is a very appealing alternative. Every time I’ve called Rackspace, a real person answers the phone, is sufficiently technical, and handles my needs quickly and painlessly. Their commit to customer support shows.

For pure ease-of-use, low-prices, ClearlyTech supports Digital Ocean, the self-described “Simple Cloud Hosting”. They are built on a new clear technology stack, including all SSD drives, mitigating some of the risk of bad disk I/O slowing down an otherwise sufficient server.

This is a great option if your developers need extra horsepower without a lot of hassle, or if you need to get a prototype up for customer testing on a public IP address with easy setup/teardown process. They are a pleasure to use, and time will tell whether they keep expanding their offering into something mature enough to use for more serious production deployments.

If you want dedicated hardware, you could go to Rackspace. But for that, ClearlyTech supports Softlayer

Thousands of reputable companies rely on them for no-frills managed data-center hosting. You may still need some sysadmins to run the show, but SoftLayer consistently has good prices on excellent hardware and extremely reliable hosting.

There are so many players out there, we won’t even try to mention more than a few alternatives. But we’re keeping an eye on a few